Again… sorry for the delay! I just have been so wrapped up falling more in love with our daughter each day that blogging just gets put off. She is sleeping right now, so I guess instead of watching her sleep I could finish up the birth story 🙂 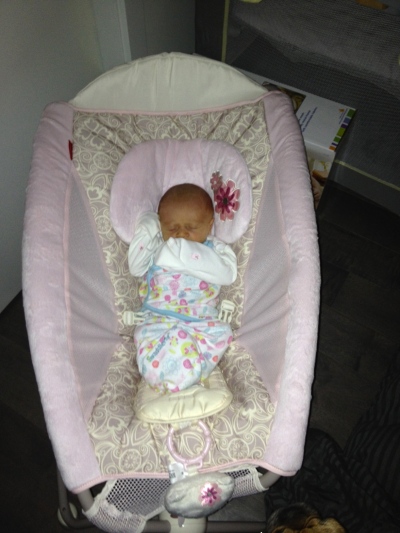 So where did I leave off? .. right after I gave birth..

After Hayden was born we were taken to our postpartum suite. Chase took the comfy pull out chair bed (it was actually comfy!) and I of course had the hospital bed. Hayden and I spent the rest of the night skin to skin just holding each other. I had her snuggled right up on my chest and I would kiss her little head over and over. I studied her face and watched her hands and fingers holding me back. I kept thinking how is it possible that Chase and I made this beautiful baby? What a miracle it was that we had created this little girl and now she wasn’t just part of our imagination. She was a real live baby! And she was ours to keep! I feel so blessed to be given such an amazing gift!

Later that morning when we woke up (I had her at 3:53am, but we didn’t go to sleep until about 6 or 7am), Hayden’s pediatrician came in and checked her out. He told me she had some jaundice and wanted her to be placed in a light photo therapy bed. So the nurses brought in a baby crib that had blue lights and she had to wear a special outfit that was velcro’d to the crib.

She was supposed to stay in the crib as much as possible when not feeding so her jaundice would go down. Well Hayden already didn’t like being anywhere but right on her mommy, (like most babies, she loves to be held) and so the blue light bed didn’t really help much. The next morning the doctors decided to do some blood cultures on the baby. The results came back that Hayden had a high white blood cell count– which could mean she had an infection. They insisted that we put her on antibiotics just in case and that we send her to the NICU for 3-10 days while she was treated. I was heartbroken. There were lots of tears. I didn’t want our baby to be sick, and I didn’t want anyone to take her from me already! Of course I was going to do what the doctor thought was best, but it was so difficult to hand her off to strangers that soon. But Chase reminded me that I had to be strong. I couldn’t show Hayden that kind of sad emotion as we wanted her to get better as soon as possible.

Chase and I had one more day we could stay at the hospital, but since we had no baby in our room anymore (and I didn’t want to be reminded being in the postpartum section with lots of babies, that ours wasn’t with us!), we decided it was best to just pack up and go home.

We signed paperwork, birth certificates, and packed our belongings.

Then we went down to the NICU to see Hayden and again all I could do was cry. I remembered back to when we had the tour of the hospital, when they showed us the NICU. I had kind of brushed that part of the tour aside because I was so sure our baby would be healthy and never have that kind of fate. Well I was wrong. There we were – sterilizing our hands, scraping any dirt out of our fingernails, and walking past babies in incubators. Hayden was in the back of the NICU, the only baby not in an incubator, and being watched over by a nice man with a southern accent. When we got to her it was the hardest thing to keep it together. I really didn’t want her to see me upset. I had to turn around and walk away from her several times as the tears just kept pouring down my face. It was so hard to see our baby with an IV stuck in her hand, and band-aids on her hands and feet from so many pricks and pokes. Being in the NICU environment she actually looked sick, and we knew she needed the love from her parents more than ever. 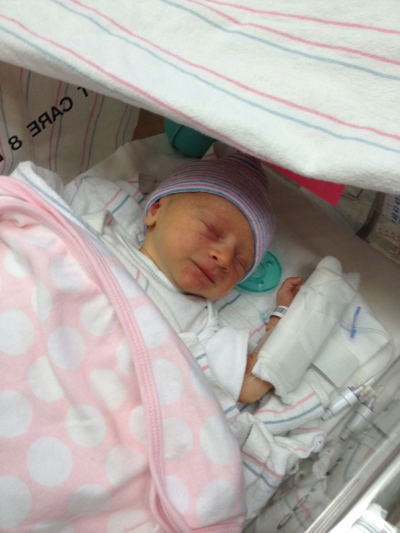 The nice man watching her told me that I could breastfeed her if I wanted to, as she only drank a small amount of the formula he had already given her. FORMULA!? We were never asked if she could have formula. Chase and I were pretty irritated that he fed her formula without any permission- especially when I was still at the hospital and these doctors should know breast is best!

We explained to her caregiver that we were breastfeeding our baby and there was to be no more formula. I told him I would be there every three hours to feed her and I would go home and pump so they had a supply.

Anyway I breastfed Hayden one more time and then we said our goodbyes. That day I returned to the hospital every three hours for feedings. {I would pump in between the feedings but my milk hand’t come in yet so all i was getting was a few millimeters of colostrum, which wasn’t much of a supply to give the hospital – they sort of laughed at us for the small amount we did bring in! That made me pretty frustrated as I worked so hard for those few millimeters!}

The last time I went in was around midnight and at that point I was so exhausted and really needed some rest. Chase and I decided that for the night feedings (until my milk came in) Hayden would have to supplement with formula so i could regain some of my strength.

When I woke up the next morning I went right to the hospital and found out that she had been transferred to Pediatrics. Apparently the NICU had too many babies, and because Hayden was the healthiest baby there, she was the first to go – her care wasn’t intensive. They also informed me that in Pediatrics department, Hayden had her own room and I could stay with her! Yay! This meant that I could breastfeed no problem! I could bond with my baby and make sure she was in the best care possible. Her room only had a pull out chair bed for me to sleep, but I didn’t mind one bit.

While Hayden was in pediatrics she had her blood pressure checked twice a day, was given antibiotics several times a day (through her IV) and had more blood tests done. I didn’t know how long we were going to be in there, as I was only told 3-10 days depending on her blood tests. On Saturday afternoon the doctors informed me that three of her tests came back and news was good. Her white blood cell count had gone down, and her other blood tests looked good. They said this was promising, and if one more test came back the next morning with good results we could be discharged.

And surprise the next morning at about 6:45 am the doctor came in and told me we could leave! Hayden didn’t have any infection and was a perfectly fine healthy baby! I couldn’t pack up our things fast enough! We were going home! Finally life could resume and we would have our family back together again with us all at home! ❤

I will be back tomorrow with her 1 week post. I will be doing her weekly posts every Wednesday from now on, I just got a little behind this week adjusting to our new life! Hayden was 1 week old yesterday! Time sure does fly, but I already knew that it would! Cherishing each and everyday with our baby girl! I can’t tell her enough how much I love her. Don’t forget to tell the people you love how much you love them today either! Life is so precious …. have a great Thursday everyone!